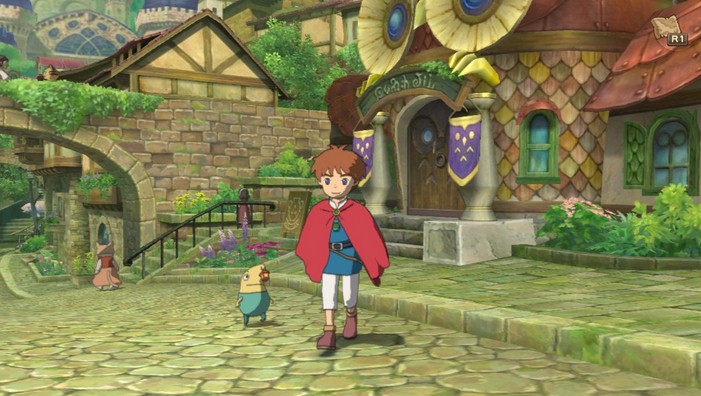 ‘Ni No Kuni’ is a video game that is also known as ‘Another World’, ‘The Other World’, and ‘Second Country’. ‘The Another World’ is a role play video game and falls into the action and adventure genres of video games. It received critical acclaim for its animated scenes, graphic design, and great gameplay. The thing that most impressed critics (OK, the thing that most impressed critics according to us) is that the gameplay for this video game is an engaging and intriguing mix of both Western style and Japanese style role playing game combat techniques. This game also won a slew on awards for the best RPG (Role Playing Game) video game category. Different versions of the game, depending on when and where it was released, have voice tracks in both Japanese and English. Some versions offer both as well and is even considered collectors items (in the category of video games).

The Gameplay of Ni No Kuni AKA Another World

In the game world, the player gets to explore the various town and villages, not to mention dungeons and other dangerous areas, and many other places in the world. The main player character in the game is Oliver. The characters in the game can use their familiars in battle. Players can also travel between this world and Motorville, which is Oliver’s home town. Players can do this using an available gateway spell that allows travelling between the worlds.

When a player finally exits a town or place, he or she will enter a world map. Oliver, the main protagonist of this game, can explore or travel to the next location on his quest using this map. As the game moves forward, different methods of transport between the worlds become available and consequently make it easier to travel between worlds and to and from different locations in the world. The player can also take up tasks that are the requests of the people in the town they are currently in as well. At the completion of each task, the player (or players) will have earned a certain number of stamps that will add to their current “merit” stamp card. These merit stamp cards can be exchanged for upgrades within the game.

The combat mode of the gameplay is activated during special events in addition to when the player meets up with an enemy they have to defeat or overcome. On defeating an enemy (or enemies, as the case may be), at the end of the fight, the player will have earned experience points, money, and even certain objects that the player can use within the game. If an adequate number of experience points is earned, then the characters’ power levels will increase. Or else at least the characters’ abilities will improve.

Players of the game can also control a single ally, who can be either human or a familiar. Familiars are a very important part of the gameplay. They are creatures that can sent to fight for the player and accompany the characters in the game throughout the quests and tasks the characters have to accomplish in the game. The familiar characters can also level up and each familiar has their own set of tools and talents. To tame creatures into becoming their familiars, players can use “Esther”. Unique “treats” for the familiars – called “drops” in the game – can be used to help “evolve” a familiar in to a more advanced and powerful form. Note that the game is over once all the characters in the game either die or are petrified.

The game is played with the help of a magic book that the player character Oliver has access to. The pages of the book contain various hints on the game, short stories to provide context for the game and the various quests, alchemy recipes, and various other kinds of information that will help the player play this game.